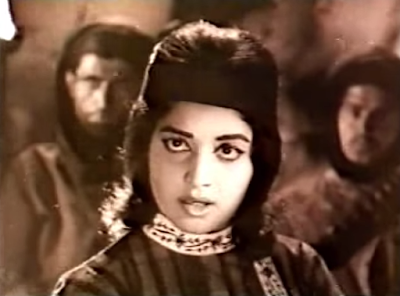 Filmi~Contrast's fascination with Pakistani actress and dancer, Rani, continues with Ek Hi Raasta (1967), a love story between an outlaw and a tawaif, and the rise and fall of a female dacoit.

But first, Rani. A couple of months ago, I realized I wasn't the only blogger fixating on her performances. Richard at Dances on the Footpath had discovered her a few years back, and I'm thrilled to not to be alone in this interest. Richard just finished a lovely tribute to Rani (her death anniversary was May 27th), and in the way only he can, curated some of his favorite Rani dances. If you want an introduction to the Rani-magic, you can't do better than spend some time with his post. 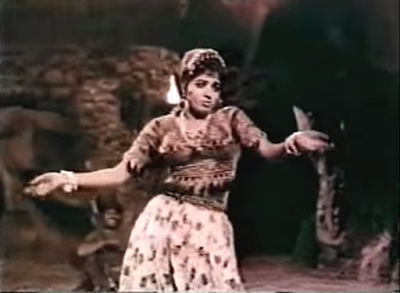 But why all the fuss? I guess ... she's an easy performer to love, and impossible to miss. You don't watch a Rani performance and wonder if it's that same girl from that other film, or just a look-alike. Nobody looks like her, much less *ahem* moves like her. When watching films with low budgets, poor preservation, missing sections, sound distortions, and no English subtitles. one needs a concrete incentive to make up the difference. Rani is that, for me. I can't say that her acting is more than adequate (she doesn't really get beyond the standard emotions), but she always manages to upstage everyone else in the room with her singular and almost masculine way of using physical space. Where other actresses might play it safe, keep things sedate and ladylike, Rani projects energy and movement. She's always big and imposing and confident, and when the occasion calls for it, she knows how to work an hero-esque action sequence or physical showdown or a seduction number (see Richard's post). 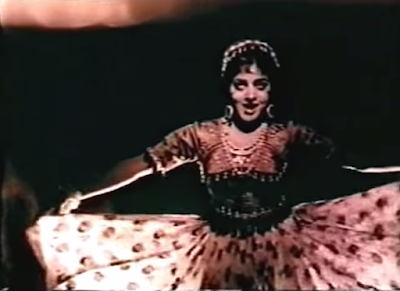 Given her physically intimidating style of theatrics, if she was working in Hindi cinema in the 60s, she almost certainly would have been confined to vamp roles. But in Pakistan, while playing several famous tawaif characters (including Umrao Jan), she played mostly positive roles, as far as I can tell. Whether this was because her peak period, in the late 1960s and early 70s, was especially open to diverse expressions of acceptable femininity (as 70s Bollywood was starting to be), or because she still manages to project "chasteness" along with everything else, or because she allied herself with some powerful figures in the industry (through her marriage and professional partnership with director Hassan Tariq), it's hard to say.

But how to approach Rani fandom? Personally, as she excels in a variety of dances (especially cabaret and folk styles), I generally pre-assess her films to see if she gets enough chances to strut her stuff. And with four dances + three montage-y songs all picturized on Rani, Ek Hi Raasta was a no brainer.* 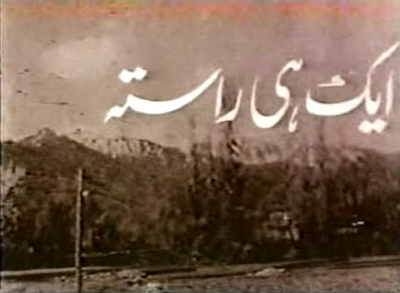 While not exactly frequenting "best-of" lists, I would argue that this film offers an entertaining twist on a stock plotline: good farmer Badal (Sudhir) becomes a dacoit when he crosses some bad elements in the district, mainly a corrupt police commissioner and his associates. I'm not positive on the exact reason for his persecution, but it seems he is blamed for the willful destruction of his home village (which was probably a personal attack on him by the same authorities). After escaping prison, he becomes an outlaw. Around the same time, fresh-faced Putli (Rani), the estranged daughter of a town official, catches the lecherous commissioner's eye. When asked, the unscrupulous baap arranges for his daughter to meet him at an appointed place. Of course, it is the commissioner who is waiting for her inside the room. And as we all know, after being raped, Putli has no other course of action but to become a tawaif to support herself and her mother.

Of course, it's only a matter of time before Badal visits Putli's kotha, soon making it clear that he wants the lion's share of attention. This sets up one of the best running gags of the film. One of the other clients is uncomfortable with the presence of the outlaw and calls him a chor. With dry humor, Badal replies, "Chor nahiin, daku." [This kicks off a series of dialogues in which a person in power will call one of the two protagonists a name, only to be rebuffed with a preferred identifier. It never gets old hearing marginalized characters stick up for themselves.]

Enter honest police-wallah (Talish), who realizes that the best way to find Badal is to harass the daku's favorite courtesan. This doesn't get him far, at first. Putli still has little knowledge of Badal, other than that he's chased a few paying clients away. Police-wallah comes up with a plan to encourage the connection, sending Putli to the outlaw-controlled region to be "captured" by Badal.


Badal is clearly-head over heels in lust for Putli ... especially when she breaks out the flamenco-y gypsy number at his camp. It might be the standout dance of the film, if only for the pop-fantasy element of the captive seducing the captor. Here, the film shifts from a tale of woe and injustice to something closer to old Hollywood swashbucklers. Shades of Baaz (1953) are everywhere. But the idyllic camp-life is disrupted by a wedding procession. And who is it but the corrupt official at fault for Badal's mother's death, all bedecked out as a groom. Badal takes swift revenge, killing the official mercilessly. Afterwards, when he realizes what he has done, he laments to Putli. Unfortunately, the very same official he killed also happened to be her father. 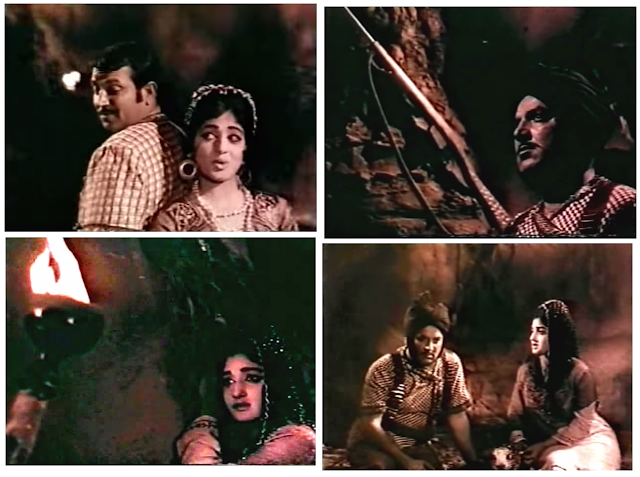 Distraught, Putli goes through with the plan, running off into the wilderness, and leading Badal (on her tail) right into the hands of the police. Still, she's torn, and sings a fabulous song, "Parvane, jal na jaana, shamaa nazar ka dhoka hai." (Moth, do not burn, the sight of the candle is a deception.) Here, too, the melody echoes songs from Baaz.

Badal escapes on the way back to town, and Putli goes back to the kotha. But soon she meets Badal again on her own terms, when she takes in a revolutionary. Here I have to concede my ignorance, as the reason for the ongoing populist uprisings in this film that escape me. I'm not sure if it's supposed to be Partition violence, or local tribal wars, or revolutions against the corrupt rural government. No idea. But the film makes you feel as if revolutionaries are in the right, and Badal soon thinks so, too. After getting pouty that Putli has taken in another outlaw that isn't him (which is mostly played for laughs), they run off together and join the revolution proper as dacoits in love (but they're mostly in love with blowing things up, I think). 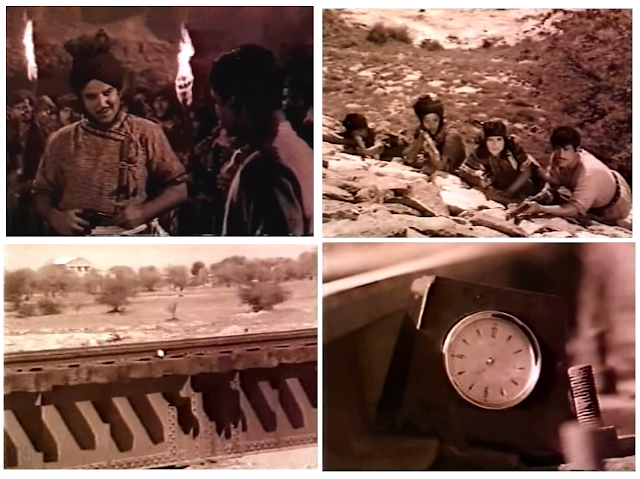 The rest of the film will probably be no surprise to those familiar with Westerns and outlaw stories (Bonnie and Clyde, Butch and Sundance), but it's still a lot of fun to watch.

I have a low tolerance for messy beginnings (which plagued this film), but I have to say I liked Ek Hi Rasta more and more as it went along. I'm never going to say no to a female dacoit, and Rani as that dacoit is as much as I could ask. (Other than finding a copy of that elusive Rakhee-Vinod dacoit film from the 80s, that is.) I'm just sayin', the woman knows how to use a bayonet. 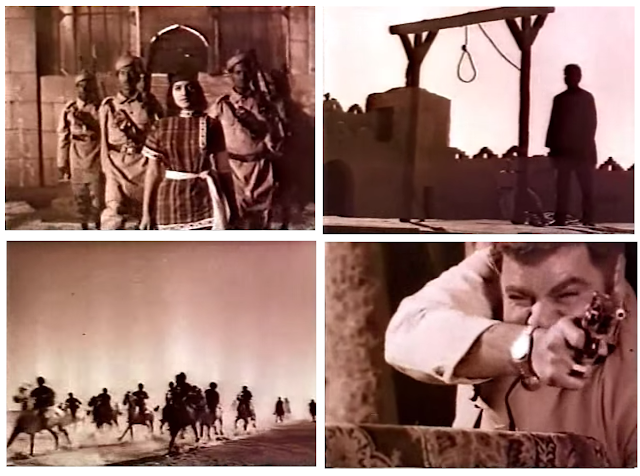 I also kind of love that Ek Hi Rasta's idea of a dacoit is someone who can go anywhere at anytime, as long as he is wrapped in a curtain. Need to get into the masjid? No problem. The kotha? Please and thank you. The police wale building? They won't look twice until you throw off the sheet and start waving your gun around. 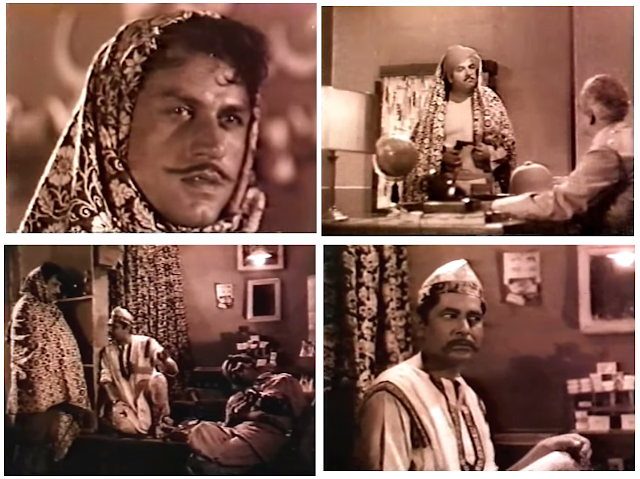 Talish has the standout male role in this film, if only to employ his lovable character-actor versatility. After running into him several times, I would categorize him as the Madan Puri of 60s Pakistani cinema: equally comfortable as a cackling villain, a dedicated cop, or a traditional baap. 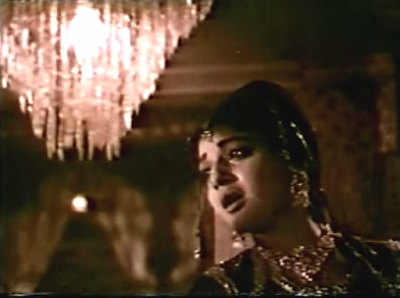 I liked the fearless on-the-nose transitions, like between a dialogue where the dacoit says he eagerly awaits the moment when he is no longer a "daku", but "Putli ki saathi" (Putli's companion) and a lone desert ride with the pained vocalized refrain "Meri saathi..." But overall, this film usually uses songs to push the story foward, and smartly (Hassan Tariq did direct, after all), Rani is the lead in ALL of them, while Sudhir is usually just the observer or the object of interest. Quite all right with me, as at this stage, he was far past his romantic hero heyday (which I have yet to see in action so ... can't be sure what that heyday was like). He was best when delivering humorous dialogues, or threatening people in his headdress and fake Sikh beard.

Still, if you aren't convinced, find the film on YouTube (with the exception of the one above, the songs aren't uploaded separately). Skip to the mujras (which aren't perfect technique-wise, but are fun and well shot) and montages, and if nothing else, the gypsy camp number at 102:30 is delightful.

*As this film did not have subtitles, some scenes were missing, and some of the dialogue was very colloquial/hard to hear because of the audio quality, I hope you'll forgive any errors in my narration of the plot.
Labels: adventures sans subtitles Hassan Tariq Pakistani Film Reviews Rani Sudhir Talish ایک ھی راستا پاکستان فلم 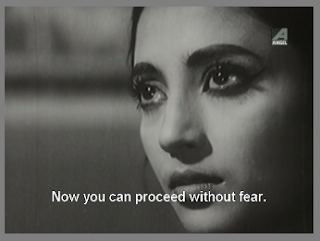 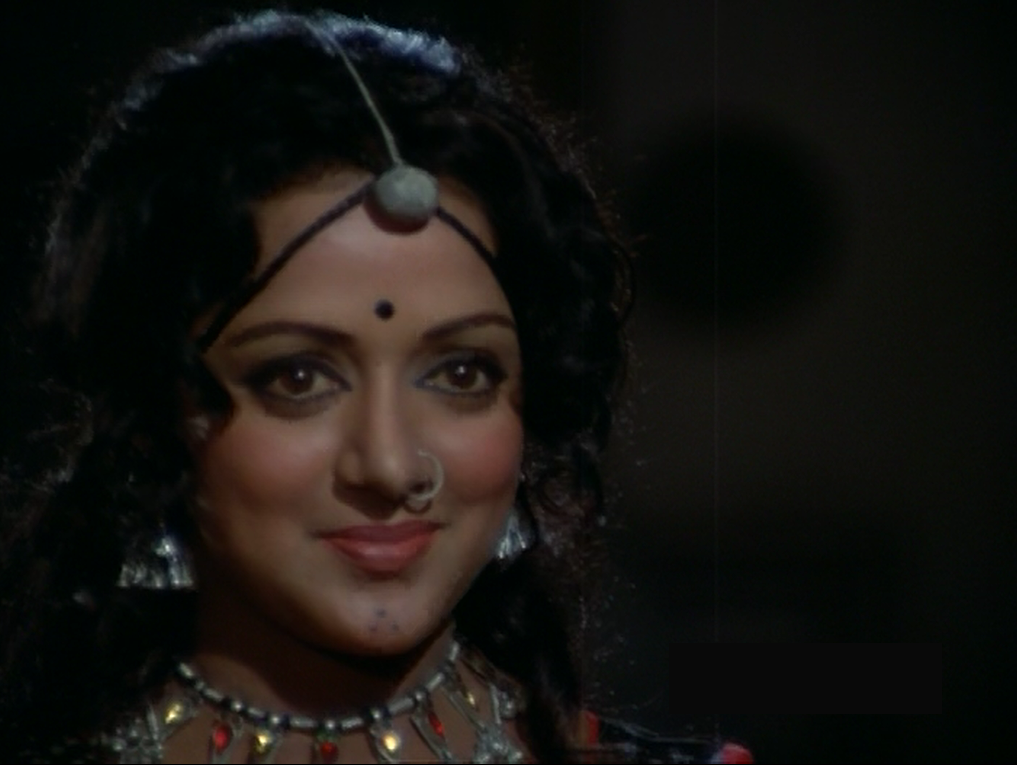 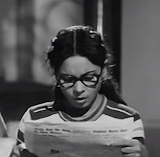 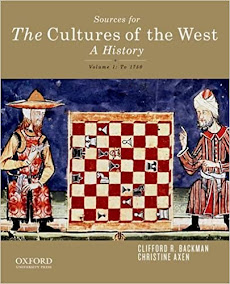